5 Scottish Trail Running Routes To Get You Started

Scotland is a destination where trail-runners can let their imaginations unfold. The highlands are a natural playground with endless trails and mind-blowing landscapes. The possibilities are so endless that it can sometimes seem difficult to know where to start.

If you’re looking for adventure, then let Girls on Hills inspire you to start exploring with these top 5 trail running routes: 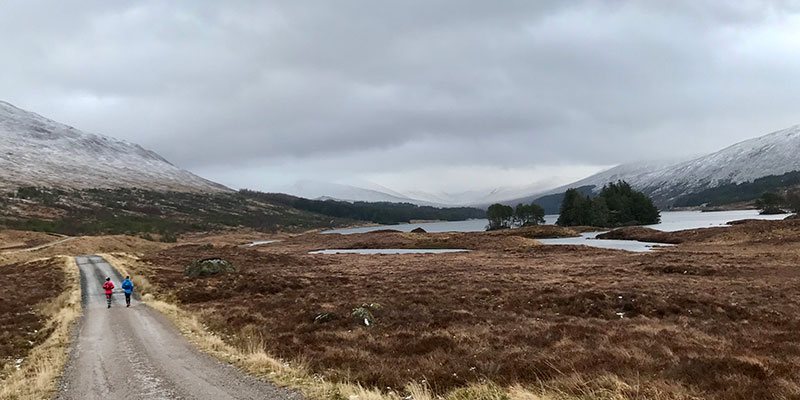 This is a wonderfully remote trail with a real sense of adventure. This 9-mile loop is only accessible by train (or a very long walk) and takes in the wild surrounds of the Corrour Estate on the edge of Rannoch Moor. The route is almost flat (<100m ascent) and follows a wide Land Rover track along the shores of stunning Loch Ossian.

The start and finish of this run is Corrour Station itself (the highest station in the UK). The neighbouring station house is open in spring/summer as a café and restaurant. Look out for the rustic SYHA eco-hostel as you approach Loch Ossian and the impressive Corrour Lodge at the far end of the loch. 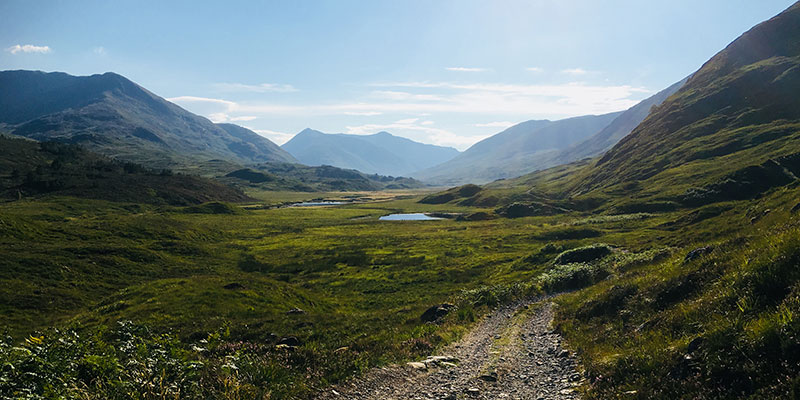 Glen Affric is one of the most stunning glens in Scotland, with the magical mix of native Calendonian pine woodlands, remote lochs and a mountainous backdrop. To access this 11.5 mile route you need to drive to the very end of Glen Affric minor road (a very scenic experience on it’s own!) The run starts and finishes at the end carpark, which is a picnic spot with toilets. This trail run is a route of two halves, with the first half on undulating Land Rover track, and the second on rougher single-track (if you run clockwise).

There are some gradual climbs (330m ascent in total), but in the main it is easy to navigate, despite having a wild and committing feel. After you have passed the loch at its west end, don’t miss the bridge crossing the River Affric (at Athnamulloch) – and avoid continuing along the Affric Kintail Way. Pick up a smaller trail towards Loch Coulavie and re-join Loch Affric above its northern shore. Wonderful gnarled ‘granny pines’ line the trail back to the carpark, passing Affric Lodge on the way. 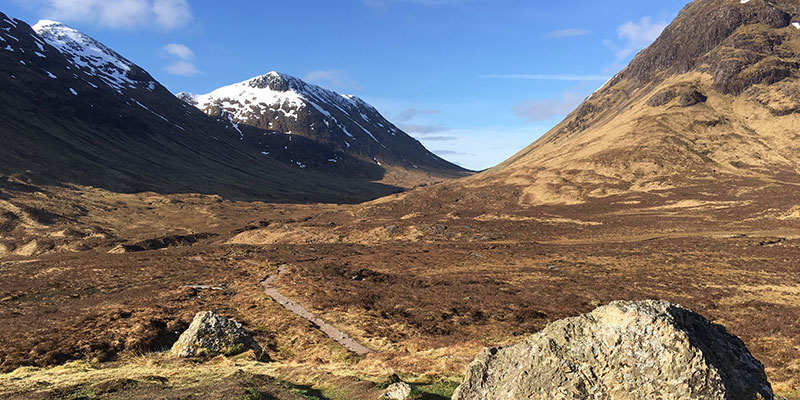 This rugged mountain trail circumnavigates the base of Buachaille Etive Beag (a mountain made up of two Munros). The route starts at a carpark on the A82 (NN187562) and follows two major glens: ascending the Lairig Eilde and descending the Lairig Gartain. Best undertaken in an anti-clockwise direction, the trail crosses the biggest river early-on (at the first junction take the trail forking rightwards down to the river, not rightwards up the mountain). There are many more river crossings along this route, but overall the navigation is fairly straightforward.

Once round the back of Stob Dubh, gain the Lairig Gartain and follow the trail upwards to the highest point (the col at 490m, which is marked with a cairn). Remember to look behind you as breath-taking views open-up over Loch Etive. This is the most strenuous part of the route and contributes considerably to the 573m climbed on this 9.25 mile loop. Excellent downhill running follows and delivers you back to the A82 where you'll have to do some bog-hopping back to the car. 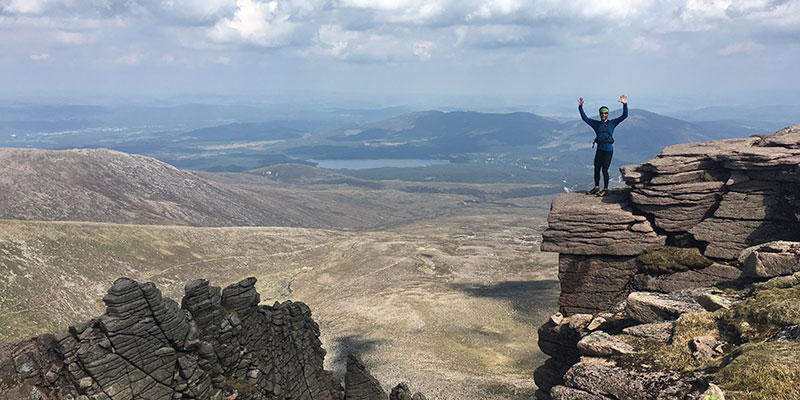 This route uses the trails of the extensive ski infrastructure at Cairngorm to gain the plateau, but what is lost in industrial development, is made up for by accessibility and impressive terrain. For trail-runners this route is best done in a clock-wise direction to give a fantastic descent on great trails from Cairn Lochan back to the ski-centre carpark.

Climb Cairngorm by the tourist path, then descend the broad, stony slope (pathless) SW from the summit to the spot-height 1141m. From here, pick up the undulating trail along the rim of the northern corries (Coire an Lochan and Coire an Sneachda). Enjoy fabulous views down dramatic cliffs and take-in the impressive rock architecture. The descent route follows the rim of Coire an Lochan from the summit of Carn Lochan, northwards to a ridge which connects with perfect trails linking back to the ski-centre carpark. At 600m height this carpark reduces the overall ascent involved in this run, which clocks-in at 7 miles and only 775m of height-gain all-in.

Note – it is important not to underestimate the weather conditions on Cairngorm plateau. Despite being very accessible, runners should know how to navigate with a map and compass, and be equipped for running in the mountain environment. 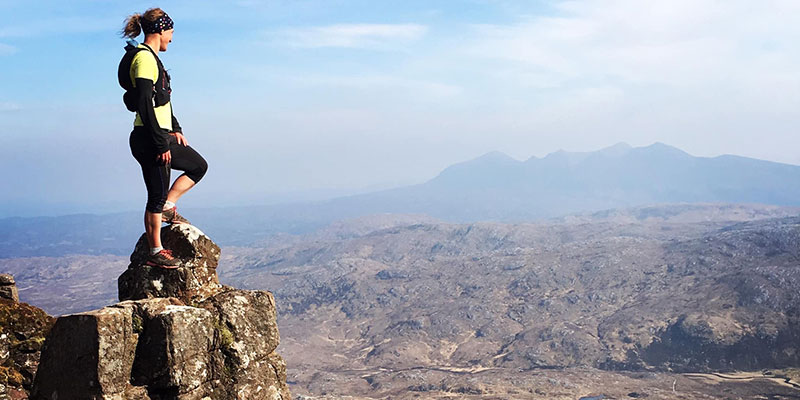 If you’re going to run up just one mountain in Scotland it should be this one. The formidable outline of Suilven is one of Scotland’s most recognisable profiles, rearing-up out of Assynt's ‘cnoc-and-loch’ landscape. The mountain gives unsurpassable views in every direction and getting there is worth every effort. The 12.5 mile route described here is an out-and-back run but the scenery is so special that you won’t mind!

Start at the small walker’s carpark just before Glencanisp Lodge (make a donation in the honesty box!) From here you’ll have to run on tarmac at first, past the lodge, to gain the trail proper. Once through a deer-gate the terrain underfoot roughens, following a river and series of lochans until it forks (a turning to Suileag bothy). Continue straight-on here until you cross the river on a substantial bridge (just after Lochan Buidhe). From this point, keep an eye out for a newly improved trail coming off to your right (this has seen significant work in the last few years and is now excellent). If you reach Loch na Gainimh then you’ve gone too far!

The runnable trail meanders through lumpy ground and twinkling lochans before reaching a steepening below the col in the centre of Suilven’s great form. Although a bit looser in places, the track is all-there (with some muddy scrabbling in places), ascending until the col is reached. Unless you are experienced scrambler, head for the West summit only (the eastern summit is extremely technical and exposed). Pass the ‘hole in the all’ after which several sandstone steps must be negotiated before the main summit of the mountain appears (marked with a large cairn). Overall this run climbs 947m but you’ll hardly notice it with the ever-changing views! You’ll need a minute (or ten) on the top to take it all in before heading home the same way.

Wherever you run in Scotland it is important to respect the changeable and sometimes severe nature of Scottish weather. Many of these trail running routes are in mountainous and extremely remote locations, so make sure you are well prepared, can self-navigate and have told someone where you’re going – if only to make them jealous!

Keri Wallace is Co-Director of Girls on Hills, a guided trail, fell and skyrunning company in Glencoe, Scotland. Girls on Hills is sponsored by Ellis Brigham Mountain Sports.