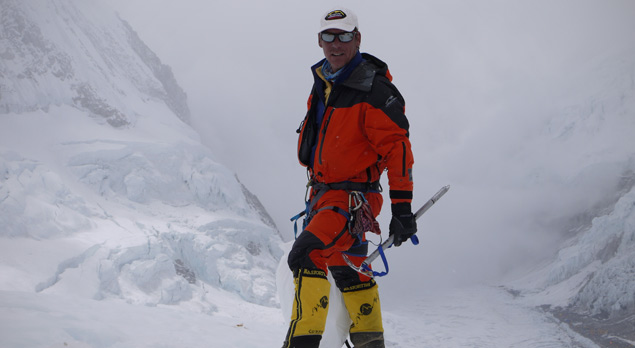 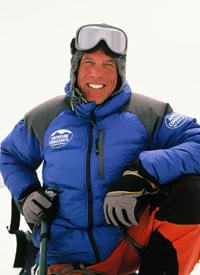 Guy Cotter was leading his own expedition on Pumori, Mount Everest's 7000m next-door neighour, when events began to unfold on the world's highest mountain in May 1996.

Two groups were caught out by the severe snow storm that engulfed Everest that day, one led by Scott Fischer of Mountain Madness, the other led by Rob Hall, founder of Adventure Consultants - a New Zealand-based expedition company. Despite a ground-breaking rescue mission, the disaster resulted in the deaths of 8 climbers.

Now, almost 20 years on, the incident is being depicted on the big screen, with Everest due to be released in September. Starring big names including Jake Gyllenhall and Keira Knightley, Guy Cotter is being portrayed by Avatar actor Sam Worthington.

A world away from the catastrophic series of events that occured two decades ago, Cotter is sat in our Covent Garden store on a whistlestop three week tour of Europe - a rare chance to leave his native New Zealand without being involved in one mammoth alpine ascent or another.

"I was talking to Rob [Hall] on the summit." he recalls. "As things started to deteriorate for him up there, I was recognising what was going on and I became involved in the rescue and helped coordinate that from base camp. I knew what and where everybody was, who the players were and everybody that was on the mountain." 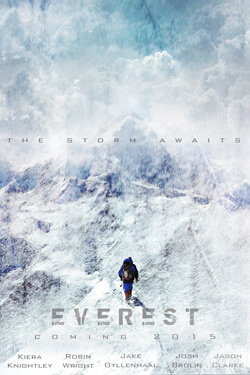 Cotter still harbours frustrations that he couldn't help more that day. "I wasn't acclimatised, I'd just arrived, I couldn't get up on the mountain. Even if I had I probably wouldn't have been able to get very far in time to do anything really effective." But it was the audacity of Cotter and others leading the mission from Base Camp that led to the successful rescue of those that had managed to return through the storm to Camp II.

The story of what happened on Everest has already been documented in several books, most notably Into Thin Air, written by expedition member Jon Krakauer, a journalist and part of the Adventure Consultants party. Everest is based on the cumulative versions of survivors, but Cotter is keen to emphasise that it will not be a definitive account. "It's not a documentary. The mountaineering community should take a deep breath before they go because people get carried away about authenticity."

"I've been advising on the film, just on how to make it look authentic – should they be wearing a pack at this time, or a harness, or crampon? How should they be feeling at this time and altitude – all of those elements that they need to make a film like this because people are looking for that detail."

Cotter's expertise comes as a result of a mountaineering career that few can rival. He has reached the summit of Everest four times and come agonisingly close on two other occasions, but experience has taught him that reaching the top isn't the be-all-and-end-all of an expedition. "We do a lot to try and educate people who are coming with us to the fact that reaching a summit may not happen." He says matter-of-factly. "Of course being in the mountains sometimes you get conditions that you can't press through, sometimes you get clients whose physiology doesn't enable them to do it." Thankfully for his company though, many of his clients end up becoming repeat customers – testament perhaps not only to the addictive allure of big mountain ascents, but also the quality of guidance provided by Adventure Consultants.


"If people believe in the leadership that's being displayed on the expedition then they will go with the decisions that are being made...
It will be a stronger team for it."


Cotter believes this focus on education is the key to the success and enjoyment of an expedition. While some companies take an autocratic approach to leading a party, he insists on presenting a group with choices and reasoning. "The way we play it is that if people believe in the leadership that's being displayed on the expedition then they will go with the decisions that are being made, especially if everybody is informed along the way. It will be a stronger team for it, and people pick up skills as they go. It's much safer as a group."

Tragically, two incidents on Everest have surpassed the toll of the 1996 disaster in only the past 12 months - the latest killing 19 people of the thousand or so stationed on the mountain when the earthquake struck Nepal. The tremors triggered an avalanche off Pumori - the very mountain Cotter was on in 1996. The avalanche struck the busiest part of the mountain - Base Camp [ed - the incident badly affected the Adventure Consultants team - see more information at the end of the article]. Nevertheless, the number of climbers wanting to reach the world's highest point has continued to grow, with many questioning how numbers on the mountain could or should be managed.

"The question of regulating it is where it starts to become problematic." insists Cotter. "As soon as you start to put controls on it like that it will be like the old days where you had to be part of some special team and have the secret handshake and special nod and all the rest of it just to get onto the mountain. You've got to have a permit – there's a whole lot involved with that." However he says the problem now facing would-be Everesters is not numbers on the mountain, but companies willing to cut out the middle man to reduce costs. "This means people are able to buy a permit without any prerequisites for getting onto it, so there are a lot people who are under-qualified who are basically buying their fare onto the mountain."

"A lot of fatalities come around because of this" he says. "They're told by these companies that you don't need to have any support from western guides. That's fine if you're somebody with a lot of high altitude experience, but for someone who has just done a bit of climbing in the Alps, it's not advisable. We see a lot of it going on and it's quite scary to see it happening. We're very concerned, especially when you see figures like one company losing 25 people in three years."


"People are looking for things that are a lot more meaningful. This is where we're really enjoying a lot of these trips."


Yet while the appeal of Everest escalates, so too do the ambitions of clients and the attraction of less-frequented mountains. "A lot of people come to Adventure Consultants saying 'right I want to go on holiday but I don't want to lie on the beach, I want to go and do something awesome.' We're seeing more people try and climb the Seven Summits" he says. "They might diversify or want to climb something like Ama Dablam or a first ascent in Antarctica. People are looking for things that are a lot more meaningful. This is where we're really enjoying a lot of these trips. To be honest, they're not massively profitable but they enrich our experiences by getting to deliver them. We run a lot of trips that are very low margin but high-content."

"When you have people at the end of it say 'this is the most amazing thing I've ever done in my entire life', you know it's a great industry to be involved in."

As the head of a company that now offers 80 different expeditions, Cotter admits finding it difficult to choose a favourite peak. "My favourite mountain is always the next one I’m going to do next – whatever that might be." he says. "One of my favourite ascents is Mt. Makalu (the fifth highest mountain in the world) and that's because we were the only group on the mountain. It was one of those ascents where we didn't know if we were going to make it - it's a difficult climb onto the summit ridge and we ran out of rope. It was just very satisfying making the top."

But it's obvious that Everest still holds a special place in Guy Cotter's heart. "There is something special about climbing Everest. The first time was absolutely amazing. I had no idea I’d be able to do it and there I was. To go back and take people up there and to gain more each time makes me feel incredibly lucky."

Guy and his partner Suze were stationed at Camp 1 when the Nepal Earthquake hit in April 2015. The avalanche that struck Base Camp hit the Adventure Consultants team particularly hard. You can read how it affected them and how you can help here.

For more information about joining one of their expeditions, visit the Adventure Consultants website. Speak to our expert mountaineering staff for advice on clothing and equipment.