The Best Ridge Walks in the UK

These adventurous hiking routes often require good boots and a degree of scrambling ability, with some demanding more confidence and a head for heights than others, but they all share an element of drama and risk that sets them apart from regular trails. From the Scottish Highlands to South Wales, the UK has some incredible ridge walking terrain. 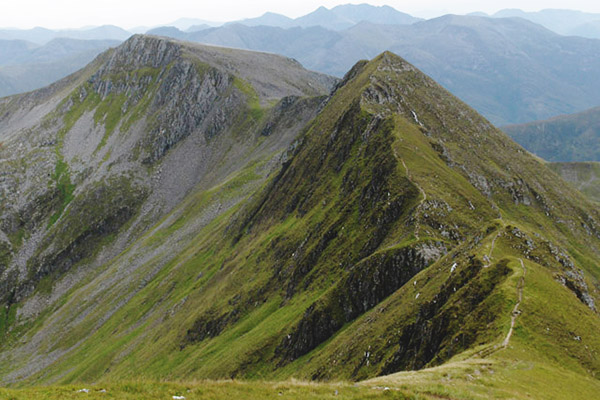 Devil's Ridge is the technical jewel in the Steall crown.

Devil's Ridge is the jewel in the crown of the Ring of Steall, an arduous circuit amongst the Munros above Glen Nevis. Taking in four summits above 3000ft this walk has spectacular views over the Nevis range, Mamores, and western highlands in an often overlooked corner of Fort William. Beginning at the car park at Achriabhach, the clockwise route takes you to the mighty Steall Falls before leading on to the stegosaurus-like peaks of the Mamores, summiting An Gearanach, Stob Choire a Chairn, Am Bodach before negotiating Devils Ridge and the final Munro of Sgurr a'Mhaim. 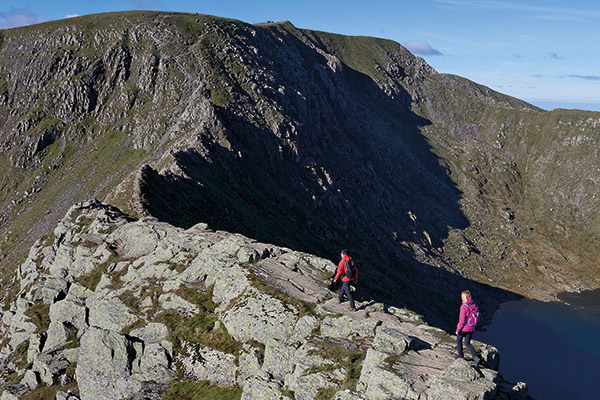 This circular route begins in the popular village of Glenridding beside the beautiful Ullswater. Taking you to the summit of England's third-highest peak, it follows the arc of Red Tarn's screed corrie before dropping back down to the lakeside. A clearly marked but rugged path leads you up to the precarious Striding Edge – from here careful foot placement is needed with steep drops either side of the arête. If that sounds a little intimidating there is an easier route running parallel down the hillside. From the summit plateau, the route then descends the northern shoulder of Helvellyn via Swirral Edge and back down to the valley floor. 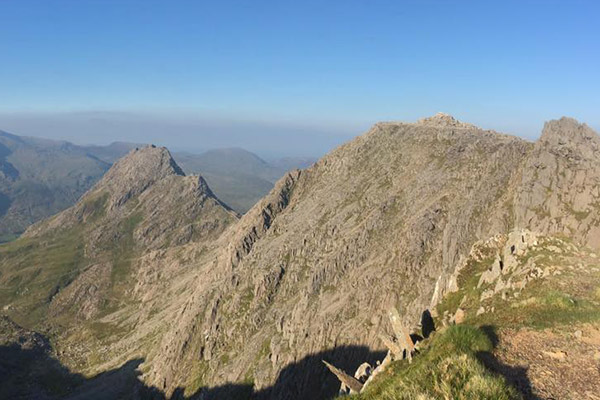 Tryfan's North Ridge is one of the most fun scrambles south of Scotland.

The North Ridge ascent of Tryfan is a challenging grade one scramble that requires negotiation of steep traverses and descents. It is often said that Tryfan cannot be climbed without using your hands, and when the weather comes in it can make for very difficult navigation as there is no clear-cut path. On a clear day though, the route is one of the most fun traverses south of the Scottish border. Beginning at the A5 layby beside Llyn Ogwen, this circular takes you past the precarious Canon Stone, and at the summit you can take a leap of faith between the monoliths of Adam and Eve - granting yourself the freedom of Tryfan. The route then follows along the aptly-named Bristly Ridge of the Glyders before descending via the Lord-of-the-Rings-esque staircase of Devil's Kitchen. 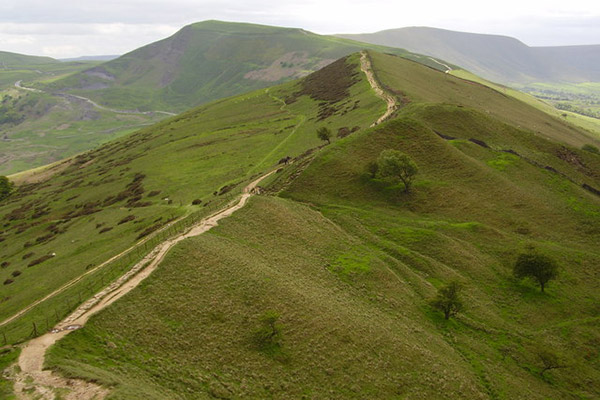 The well-maintained path of the Great Ridge is a great introduction for younger family members.

Located in the Peak District, the Great Ridge is a 3km paved trail that partitions the valleys of Hope and Edale. It is a gentle and serene walk, suitable for adults and children, but promises terrific views over the Derbyshire plains. 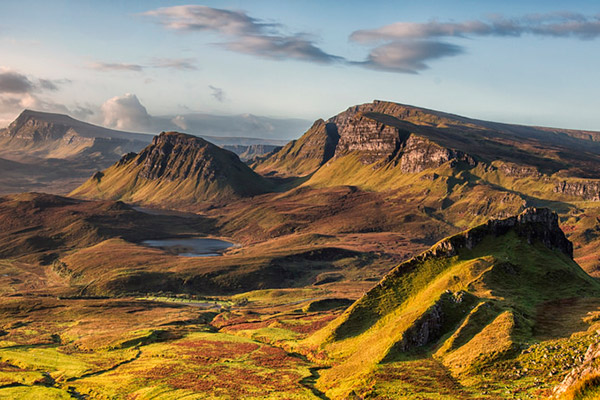 While we've stopped short of including the Cuillin due to the necessity for rope-work, we have included the spectacular Trotternish Ridge at the northern end of Skye. A two-day hike for seasoned walkers, this route is a mix of peat trails and dramatic mountain terrain.

Day one takes you through dense forests up onto the main ridgeline and past the famous Old Man of Storr. At the end of the first day you will need to camp or bivy-up on the ridge (check out our full beginner's guide to wild camping ). If it is a clear night the lack of light pollution allows for some brilliant stargazing in a surreal landscape.

The second day sees you travel on along the ridge, traversing the Quiraing, a cluster of enormous and imposing rock towers. The path heads towards the North coast of the peninsula, passing several lochs before finishing at the village of Flodigarry.. 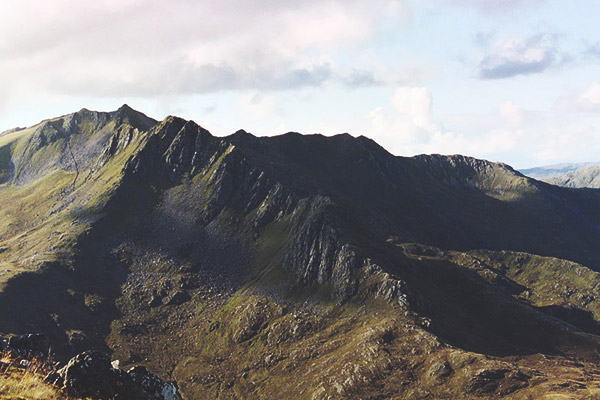 The arête of Forcan Ridge has a truly rugged character.

Part of the Kintail peaks, the Saddle is an imposing Munro connected to Meallan Odhar via the knife-edge Forcan Ridge. A rocky and steep ascent at times the ridge has some technical sections which require a good level of scrambling ability. It has an opt-out route, if you aren't comfortable with the exposure, which retains the impressive views. 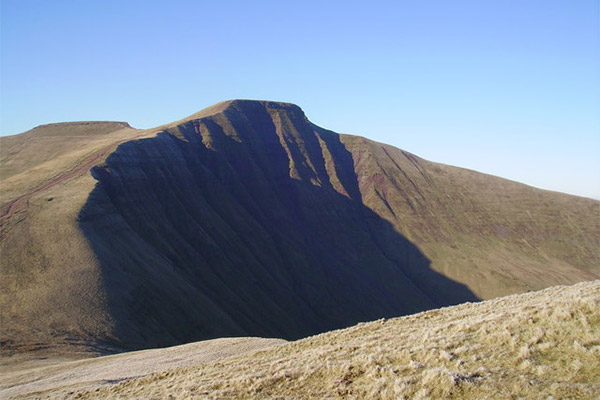 Pen y Fan is the centrepiece of the Brecon Beacons and the highest point in the south of Britain, rising just shy of 3000ft from the floor of the Usk valley. The hills that surround it - Corn Du, Pen y Fan, Cribyn and Fan y Big are connected by several ridges, forming a relatively easy circular route, but a long day out. 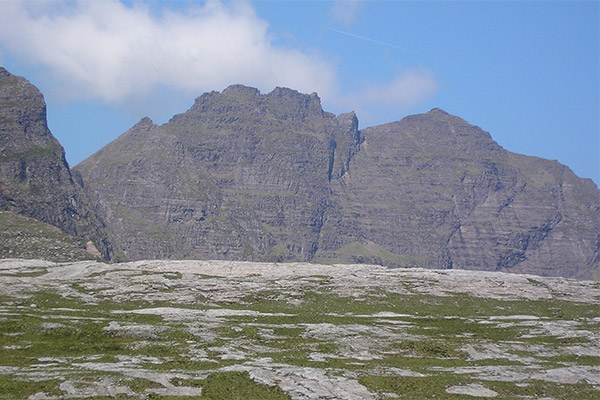 The serrated profile of An Teallach makes for an intrepid day out.

Rising above the Dundonnell Valley, An Teallach is an imposing serrated spine of Torridonian sandstone just south of Ullapool. A fairly remote range of summits, the walk necessitates a 5 mile walk before you even begin the ascent proper. Once you reach the ridgeline, the route becomes a saw-toothed blade of rock that seems to hang ominously over its eastern edge. There are two particularly technical sections: the 'Bad Step', which requires a few basic pieces of scrambling equipment, and Lord Berkeley's Seat - a teetering pinnacle reserved for the brave-of-heart. Both of these sections can be avoided if you're not feeling too confident or if the exposure becomes too much, but the heavily eroded path on its western flank should still be taken with care.

Have we missed your favourite ridgeline route? Let us know in the comments below!