Natalie discovered climbing at the age of nine, and it quickly took over her life. She joined the GB Youth Climbing Team aged just 11, competing worldwide at an international level. By 18, she had swapped the indoor plastic for outdoor sport, followed with her first forays into ice and trad; the UK has a rich heritage of trad climbing, and she wanted to be a part of that.

A coach and mentor too, here Natalie shares some of the things she’s learned about trad climbing:

The most scared I remember being on a trad climb was on an easier route, when I was learning to place gear. My placements were decent, but due to the nature of the climb following up a slabby corner with rock surrounding me on all sides, it was rather daunting. The idea of falling and tumbling down a corner on this easier climb was far less appealing than falling off a tricky move on a vertical E4 headwall, 80m above the sea! Some exposure can be more comforting than being hemmed in by rock, which must put a lot of people off trying slightly steeper, harder trad.

Going for things gung-ho isn’t what gets people up the hardest trad routes. Being bold is the result of a calculated assessment of your situation and your response to it; it's not necessarily a trait that is set in stone and always functions efficiently. We all have days when we feel more fragile or more daring! Gaining gear placement and removal skills through seconding with an experienced partner is the safest learning method.

Tip: Weight some pieces of gear to learn to trust your placements. Place some gear at the bottom of a crag above a mat and hang off them, or if you’re at a sport crag with suitable rock, place some gear and clip some bolts alternately for practice. 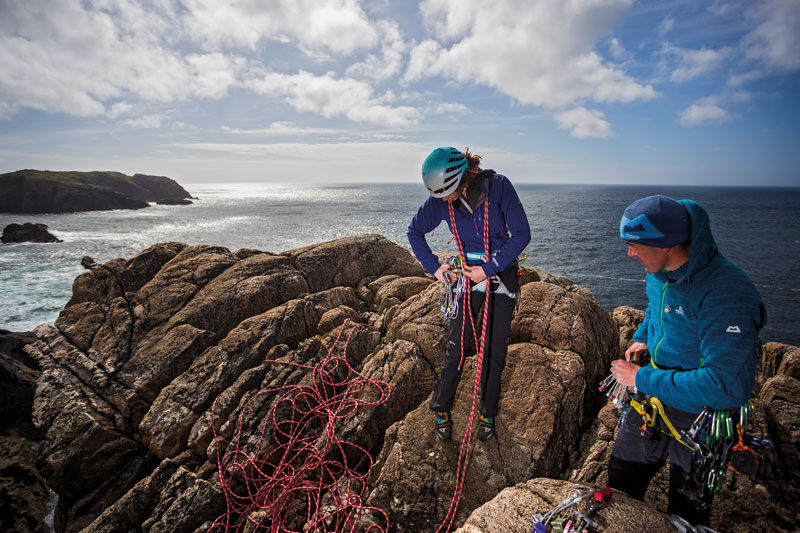 Natalie Berry and friend on 'Star of the Sea' E1 5b at Aurora Geo, Isle Of Lewis, Scotland

From my experience of redpointing hard sport climbs, I knew that breaking climbs down into manageable chunks was key to success, but it became apparent that it was even more useful for the mental side of trad climbing. I have often made the mistake of thinking of a climb as one big, daunting route. Instead of choosing designated rest spots to scope out the next section, I would try and tackle a route as one big challenge, getting blinkered by each move in isolation. Changing your approach and breaking down the climb into manageable parts helps to keep you composed.

I have frequently spent considerably more time thinking of the consequences of falling off and failing than the actual physical consequences of falling itself. Excessive pressure to succeed can lead to an inability to relax through focusing too heavily on the end goal. Breaking the route into chunks as I mentioned above is a technique I use to mark checkpoints along the way, which helps you realise that it’s just a piece of rock with a subjective letter and number attached to it!

Thinking back to when I climbed Dalriada E7 6b on The Cobbler, one moment really stood out as a point where I decided to just go for it. I was once again at the position where I had given up on my first attempt. As my thoughts drifted back to where I was just one week before, I let out an assertive power-scream to show myself that I meant business. As long as you trust your gear, getting assertive with a climb is a great way to push fear away and get you trying harder physically. A relaxed yet assertive approach is key.