An Introduction To Alpine Climbing With Calum Muskett

We invited professional climber and Ellis Brigham athlete Calum Muskett to chat with us and give the lowdown on everything alpine climbing and how you can get involved.

Calum took up climbing when he was 13 and soon developed a taste for the sport, honing his skills in his home range of Snowdonia. Over the coming years, Calum travelled the world to complete some of the world's most challenging routes (Golden Gate (5.13a, El Capitan - free ascent). His dedication, talent and passion for climbing was soon recognised, becoming a sponsored climber for Rab, Black diamond, Scarpa and an ambassador for BMC.

He has also developed his coaching skills, gaining his Mountain Instructor Certificate, becoming a member of the Association of Mountaineering Instructors and a trainee British Mountain Guide.

Could you define for us what alpine climbing is and how it differs from other forms of climbing?

Alpinism is a multitudinal activity enjoyed by rock climbers, hill walkers, winter climbers and skiers. It can be defined as mountain climbing in high, often glaciated areas, ranging from walks and scrambles through to technical climbs on snow, rock or mixed terrain.

"I mostly snack on chocolate, cereal bars, nuts and Haribo during the climb."

What was the first proper alpine route you climbed?

My first alpine route was on the Grand Capucin with Francis Blunt. We had a real adventure and ended up off route, pumped and dehydrated on the 'Elixir d'Astaroth-Gulliver's Travels' link up on the front face. Although we were unsuccessful it was an amazing experience and the following day we embarked on 'Super Dupont', a technical rock route on the south face of Aiguille du Midi, which we succeeded on!

What steps led up to you completing your first alpine climb?

By the time I headed to the Alps I was already an experienced multi-pitch trad climber and had experienced my first winter of ice and mixed climbing in Wales and Scotland. It felt like a natural progression from that stage and I had a really strong and experienced climbing partner.

What age can you start climbing alpine routes?

That's a tricky question to answer. I started when I was 15 but with the right background and choosing appropriate routes I think it would be fine to begin at an earlier age, say early teens. I think it probably depends on how you define alpine climbing but you see young families out enjoying ski touring and alpine walks quite often.

Can you briefly explain your alpine climbing setup and what are the essentials beginners need?

I see alpine climbing in two parts. There's the climbing aspect, which isn't so different from what you experience in the UK, just longer and often with more convenient bolts and belays.

Then there's the glacial travel part which is often the new bit for folks. This takes some getting used to and it really is worth seeking some professional advice or teaching on this before embarking on your first alpine mission. For this you'll need your harness, a single rope, ice axe, sunglasses, sunscreen, boots and compatible crampons. The extra items I carry on my harness are a couple of ice screws for a belay on a dry(ish) glacier, a couple of 120cm slings with a screwgate for each and also a screwgate with a couple of prussik loops and a Petzl Micro Traxon although this isn't an essential item.

"I've ended up having some unplanned bivvies, been off route, jammed ropes on abseils, dropped items and forgotten important equipment before but I consider that all to be part of alpinism's rich package!"

Apart from your hardware, what soft goods - clothing, shoes and pack - do you use and again what essentials do you recommend for beginners?

Makes sure to find a comfortable pair of mountaineering boots and team these up with good quality socks that are compatible with robust crampons. It's important you wear these in before your alpine trip for comfort's sake. There are loads of different models out there to choose from so make sure what you buy is fit for purpose – a fairly stiff sole is important and I quite like an integrated gaiter of some kind. A no nonsense lightweight 45L pack that can be reduced in size has always done a good job for me on single to multi day adventures.

I often find that people need to discover what works for them with clothing and layering. I really like a thin shirt in summer time as I can roll up the collar to protect myself from the sun and open some buttons if I'm getting a bit hot! Softshell pants seem fairly de-rigeur, thin or lined depending on the season and I'll pop some thermals on beneath them if I'm anticipating cold conditions. Standard baselayers and a lightweight fleece-like layer are good for most routes. I quite like to carry a light down layer and a thin waterproof but others prefer a synthetic jacket because they retain more warmth if you sweat into it.

Do you have any hints or tips on how to keep pack weight to a minimum?

There's a thin line between packing light and leaving yourself exposed. If you can afford lightweight gear then keep a look out for what's new on the market. On top of that, pack carefully and consider what you need between you as a team. If I carry something on three separate occasions and I don't use it then I'll consider ditching it but I'll make sure that I always carry a mobile phone, a first aid kit and an extra layer even if they aren't used regularly. 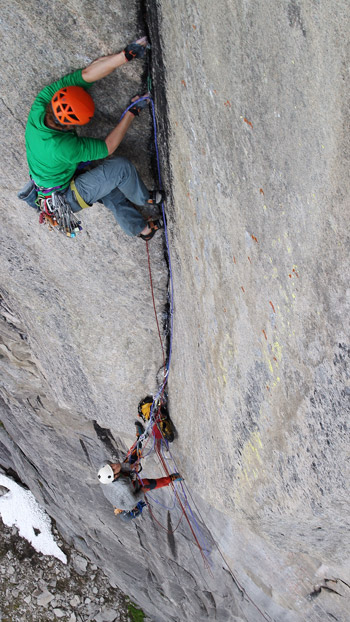 What areas of the UK are good for training / preparing for alpine routes?

This is a question I often get asked. Mountain areas like Snowdonia, the Lakes and various locations across Scotland are clearly great as they often have longer and more involved routes. In reality though, you need to think about what you're training for and what is achievable. If you haven't got access to these areas then don't despair; early starts, a sizeable rucksack and covering plenty of ground that gets you sweating is a good start. If you're going to be covering plenty of ground in big boots then practice easy climbing in big boots. If you're going to be pitching lots then see how many routes you can squeeze into a day.

I also think that doing a few all-day challenge type activities is a good way of training your will power, cardio vascular system and learning what fuel and food works for you.

Altitude starts to become an issue on some higher climbs. What steps should beginner alpine climbers take to minimise the risks and the associated problems?

Acclimatise! This may sound obvious but there's no cheating a steady programme of acclimatisation. Some lucky people seem to be able to get away without the side effects (headaches…) in the European Alps but to perform at your optimum level gradually head up higher into the mountains, making sure not to over-exert yourself too early in the trip; looking after yourself and spending the odd night up high works well.

Alpine climbing requires a partner you can rely on in tough situations. Can you recommend any ways to meet like-minded climbing partners?

Clubs are an obvious place to start whether they be your local areas mountaineering club or university club. Try persuading people you already climb or hill walk with that alpine climbing could be fun to try out. There's also a Young Alpinists group that has just been set up with the help of the BMC and Alpine Club. .

Can you recommend any courses for beginner alpine climbers?

The JCMT run Introductory Alpine Course for young climbers through Plas y Brenin at discounted rates. If you're looking for preparation in the UK there are plenty of providers who run prep courses, make sure they have got a background of alpine climbing and are qualified with either the MIA, MIC or IFMGA Guide for a good quality of instruction. The other thing to do is to book a guide for a few days to get you started on your alpine apprenticeship, a bit of good quality input early on in your career can last you a long time. 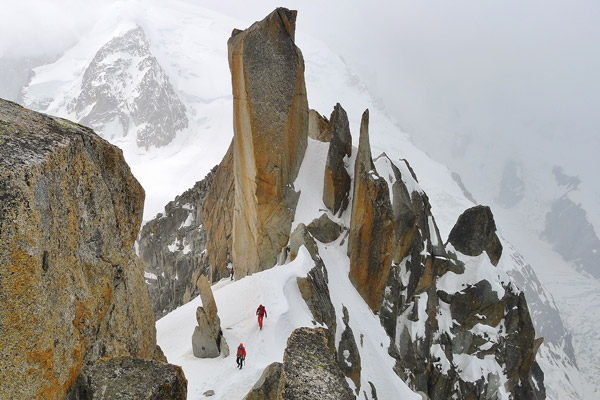 Having enough energy on a technical face can be the difference between success and failure. What food do you eat before, during and after an alpine climb?

I think people need to find what works best for them with food. I tend to eat and drink a lot before a big alpine route. I mostly snack on chocolate, cereal bars, nuts and Haribo during the climb. Afterwards I will eat and drink a huge amount more and probably end up weighing more than when I started.

People say it's important to learn from your mistakes to progress. Have you ever had any alpine climbing nightmares you can tell us about… so our readers can avoid them?

I've never had any particularly terrible nightmares to be honest, although maybe that is just relative. I've ended up having some unplanned bivvies, been off route, jammed ropes on abseils, dropped items and forgotten important equipment before but I consider that all to be part of alpinism's rich package! I normally have a good escape plan so if the weather does turn or the route isn't in condition I can scarper. Remember the 6 Ps (Prior Planning Prevents Piss Poor Performance) and you should be fine. It is also important to consider, even after a successful route, what could have been done better, were there any near misses and what are the learning points to take away.

What is your dream alpine climbing route and why?

There are so many to choose from. I would love to make a free ascent of the S E Ridge of Cerro Torre but having spent three months in Patagonia and not having a single climbing window for the route my patience has been worn thin. It's a stunning line up one of the most impressive mountains on earth and has a really rich history. The Trango tower is also really appealing as a big, technical objective. There's still so much to do in Europe though.

What advice would you give to anyone looking to get into alpine climbing?

Don't be put off by its reputation. It's more accessible than a lot of people have been led to believe.

If this has inspired you to have a go at Alpine Climbing then why not download Calum's and Steve Long's New Alpinists' booklet (free PDF), produced in association with BMC. It delves further into alpine climbing, providing practical tips and how to get started in the sport.