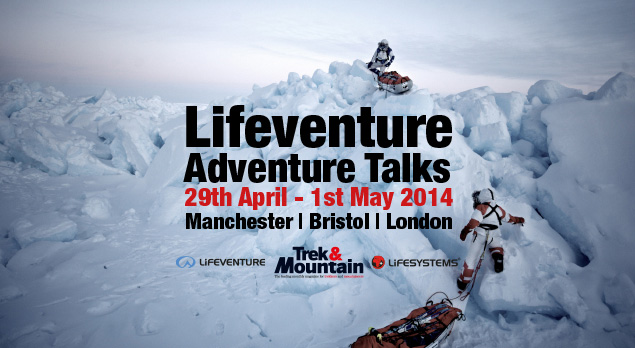 Please note that photographer Martin Hartley is weather delayed skiing across the Arctic to Canada and will now not be available for the talk dates. The absence of Martin means that Jerry Gore will now treat us to an extended version of his talk to cover other aspects of his trip.

In association with Lifeventure, Lifesystems and Trek & Mountain Magazine we present 3 evenings to inspire the inner adventurer in you.

Mountaineer, businessman, father, ex-Royal Marines Officer - Jerry Gore's life has been eventful to say the least. But in 2001 he was diagnosed a Type 1 insulin dependent diabetic. This is the story of how Jerry overcame his condition, testing his blood sugar levels and injecting insulin up to eight times a day whilst attempting, aged 52, to climb the largest unclimbed Big Wall in South America, in one of the most inhospitable regions on the planet - Patagonia!

Martin Hartley is one of the world's leading adventure travel photographers (recently voted one of the top 40 "Most influential nature photographers on the planet" and one of Time Magazine's Heroes of the Environment), Martin specialises in documenting the most inaccessible places on earth. He has documented 20 unique polar assignments and is the only professional photographer to have crossed the Arctic Ocean on foot and with dogs. Martin will offer insight into his cold world as seen through his camera.

Ticket holders will also receive a FREE limited edition Lifeventure Adventure Talks thermal mug worth £10.99 with every ticket purchased (Available on the night)