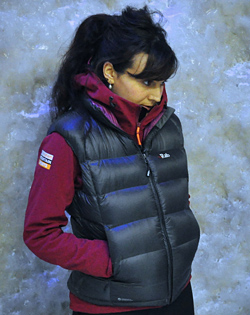 In September 2013, Shona Douglas Thomson became the first Scottish, and only the third British female, to run a marathon on every continent. Her achievement means she joins the Seven Marathons Continents Club. There are fewer than 100 members of the club, and there are some truly incredible and inspirational names on the list, most notably the heroic Ranulph Fiennes.

In 2014 Shona has already been nominated for Scottish Adventurer Of The Year and on the 9th April she will run in the North Pole Marathon. She is no stranger to the cold and ice having already completed the gruelling Antarctic Ice Marathon in November 2012.

Shona will be teaming up with her trainer David Arnot to present 3 talks in London, Manchester and her hometown of Glasgow this May.

Shona will talk about her background and her decision to change the direction of her life from working in the City to endurance athlete and what motivated her to run 7 marathons on 7 continents, the challenges she has faced along the way and offer an insight into her most recent event The North Pole Marathon.

David is a highly experienced personal trainer, with several high-profile clients including fitness models, sponsored athletes, competitive rowers and rugby players. Focussing on nutrition as a key element of his training programmes, David will be offering tips and advice on how to build strength for endurance events.

Proceeds from the talks will go to Shona's nominated charity Dame Kelly Holmes Legacy Trust and the 5x50 Challenge.

Event registration for Adventures Of Endurance - Manchester powered by Eventbrite